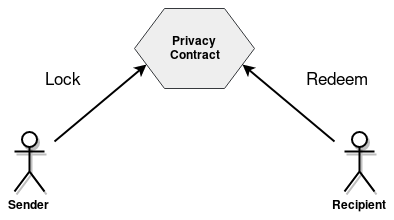 Hypothetically, if a user were to lock 427 WAN into the privacy smart contract, and then soon after another user were to redeem 427 WAN from the contract, it would be fairly obvious that the two transactions were linked. Transaction values accordingly can reveal connections between senders and recipients. For this reason, the privacy contract was made to only allow certain values to be locked for a given privacy transaction.

When locking funds into the privacy contract, a user can thus only lock an amount in the list above. Likewise, a user cannot redeem partial amounts, but must redeem the full amount that was locked to the one-time address.